The Birth of Rococo

Contents
The Birth of Rococo
Rococo Composers
How it manifests in Music
Rococo Architecture
What is Rococo Piano?
Rococo obsession in Russia
Impact of Rococo on subsequent styles of western music
In Closing

Rococo style in music occupies a really specific transition from Baroque style to the Classical era. Rococo music has diluted the highly complex polyphonic structures of the Baroque period into a lighter, simpler yet very ornamented elegant style of musical expression. Roughly landing in the decades between the 1740s -1770s rococo music took root in France and spread throughout Europe rapidly, to the delight of a growing class of ubiquitous music amateurs and aficionados. It was referred to differently throughout Europe – from Style Galant to Empfindsamer Stil (sensitive style) in Germany.

Incidentally, Johann Christian Bach and Carl Philip Emanuel Bach, two sons of the titan of Baroque Music – Johann Sebastian Bach -were at the forefront of this stylistic revolution against the density and complexity of the Baroque period composing style in Germany. In France Style Galant was championed by Jean Philippe Rameau, Louis-Claude Daquin and François Couperin while in Italy the music of composer Giovanni Battista Sammartini was rococo personified.

Rococo composers wanted to convey the lightness of heart and simplicity of emotional states, by focusing the artistic expression on a single effect, as opposed to conflating multiple disparate emotional states as a counterpoint to themselves. Galant’s style in music brought forth instrumental works such as string quartets to take center stage in musical entertainment, outpacing the contrapuntal vocal compositions of the early eighteenth century.

The new style called for instrumental music to delight the ear with intricate ornamentation, memorable melodies, and a positive disposition. Many composers were happy to oblige these new musical tastes. Rococo art and music are remarkably symbiotic as they both embody the cult of elegance and grace.

How it manifests in Music

The orchestral music of rococo was equally indicative of the new artistic style taking shape in western music. The adoption of the lighter texture and more fragmented musical thoughts of this pre-Classical style is particularly beholden to the prominence of the Italian string concerti of Tartini, Giovanni Battista Sammartini, Luigi Boccherini, and Giovanni Battista Viotti.

Bach’s sons, C.P.E. Bach and Johann Christian Bach are primarily responsible for the development of the keyboard concerto and symphony into a leading genre of music during the rococo era and, later throughout the classical period and beyond. Another one of Bach’s sons, Wilhelm Friedemann Bach was closer to his father, Johann Sebastian Bach in his music style and went on to compose half a dozen concerti for harpsichord, strings, and basso continuo. C. P. E. Bach embraced empfindsamer still with 50 keyboard concerti, among those for other instruments. The new style was especially evident in instrumentation, dialogue between piano and orchestra as well as the inclusion of recitatives laden with ornamentation (clearly borrowed from the Baroque opera tradition). It is not uncommon to find the Finale movements of his concerti exhibit clear characteristics of dramatic development and musical whimsy of the Italian comic opera buffa. And his brother Johann Christian, also known as “London Bach’ contributed to the development of the symphony, a preeminent genre of classical music at large.

Rococo music was a reflection of the rococo style in architecture, fashion, and interior design, at the center of which is the delicate pleasantness of short phrases, homophonic rather than the polyphonic structure of composition, and a new emphasis on ornamentation, just as the elaborate decor and embellishments adorn the rococo object d’art and architecture.

The Rococo period gave the world some of the most elaborate dresses and architectural elements, imbued at once with elegance and opulence. The court of Louis XIV was a French apogee of the Baroque style, and upon the passing of the king, the true elements of everything rococo began to take hold of the lifestyles of the rich and royal. The pastel color palette is prevalent as well as a myriad of ruffles and frills, embroidered lace, and all forms of decorative excesses that are lightweight and less geometric than in the preceding Baroque period. The essence of rococo seeped into everything from wallpapers to armoire, from porcelain china to chandeliers.

The basic tenet of rococo design is the presence of the seashell motif as the center element producing undulating curves and counter-curves that are all inspired by elements of nature. Asymmetry rules, as opposed to geometric symmetry of the Baroque era, and the abundance of flowers, as well as exoticism (by way of Chinese and Japanese motifs), create an immediate appeal at the first glance.

What is Rococo Piano?

The word rococo itself is a take-off of French rocaille, which described a Baroque technique of decorating grottoes and fountains with a myriad of pebbles and seashells held together by clement creating ornate surfaces that seem to be paved with natural wonders. The rococo piano became a visual marvel at the center of the cultural household and royal palaces. Every Royal Court in the 18th century had a musical director hence artists and musicians were always present at sprawling mansions so having a piano that would represent the splendor of rococo was an absolute must for anyone with social aspirations. Rococo pianos adopted the same architectural elements as the large structures of interior design: undulating curves, flowers, and palm leaves intertwine with asymmetrical wood carvings and an abundance of gilded bronze. New styles permeated everything and rococo piano was not an exception. White lacquer features painting and gilded bas reliefs. While architectural elements and interior design of rococo express its asymmetry on a monumental scale, rococo pianos have it miniaturized down to the tiny golden appliqué near the piano’s fallboard or pedal lyre.

French architecture of the rococo period (mid-18th century) was so beloved by the Russian Empress Elizabeth II (ruled 1741-1762) reproduced it, only the Russian way. The signature undulating curves found their way into the onion domes of cathedrals and pastel and gold were the order of the day. The new sense of style was refreshing and lighthearted while at the same time allowing the immense wealth of the Royals to shine brighter than ever, since almost every surface you can think of was either converted in 24K gold, incrusted with malachite, or carved out of amber. So it should come as no surprise that the malachite piano became a permanent presence at the Winter Palace, Kremlin, and all other royal residences. Made of precious stone and decorated with gilded bronze, the malachite piano was the ultimate representation of Russia’s might, wealth, glamour, and grandeur. Many years later, in the 19th century, a Russian iconic composer Tchaikovsky will compose his famous Rococo Variations as a homage to the golden age of graceful elegance of the rococo era in the 18th century.

Impact of Rococo on subsequent styles of western music

All over Europe the new style of music was taking a stronghold and pushing the music more and more into the realm of popular entertainment, accessible to all and understandable by all. Sensitive style or style Galant was all the rage in France, Germany, and Italy (they were music centers in the eighteenth century) and all the others followed. Classical music owes a huge debt to this relatively short period as it was indeed a bridge to the Classical Style which gave the world the likes of Joseph Haydn, Wolfgang Amadeus Mozart, and Ludwig von Beethoven in the later part of the 18th century. Their music evolved out of the Galant style with its rococo idioms and music history testifies as to how that transition took place, particularly in the genre of symphony and keyboard concerto.

As musicians were becoming more are more skilled at virtuoso playing, the composers were encouraged to compose music that was showcasing those skills with ornamentation, likable melodies, and cadenzas. Rococo composers planted the seeds of the art of the high classical period, of which the comparison of early and late symphonies of Mozart is a great example, as well as the comparison of Beethoven’s piano concerti. While the Viennese trio (Haydn, Mozart, Beethoven) matured and composed in a ‘classical’ style the attributes of style Galant (empfindsamer still) are all there: memorable, beautiful melodies, exuberance, and whimsy of music character (at least in early works) and intricate ornamentation. Particularly in the keyboard concerti, there is an obvious presence of recitative and opera-like fioritura, which originated in the rococo music of Bach’s sons.

Of course, there are many other composers than those mentioned in this article who have contributed to and developed rococo idioms in their art and particular styles. History has a funny way of adjudicating one’s contribution to art by way of the audience’s and spectator’s desire to view and hear it again. So while some of these composers were famous and enjoyed a great deal of success in their lifetime have been obnubilated by time and are now seldom part of the present art zeitgeist. Nevertheless, it is the sum of all their work, ingenuity, imagination, and skill that propelled western classical music as we know it forward into the future, and imbued it with qualities capable of evolutionary development, to which subsequent Classical and Romantic styles are indebted to.

In the final analysis like so many things in art, the very names are representative of Mother Nature. the word baroque was first a description of irregular pearls before it came to mean the lavish grandeur of the architecture. So is the word rococo – borne of a seashell decor, is a testament to our relationship with and inspiration from our environment, and the endless wonder at the world we live in.

How often should you tune a piano? 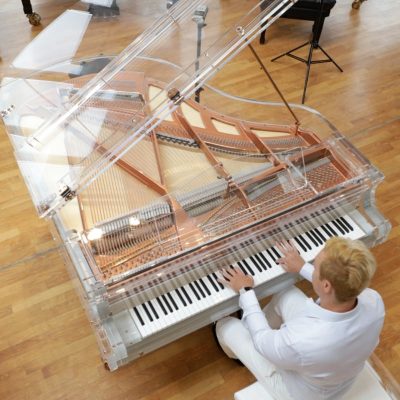